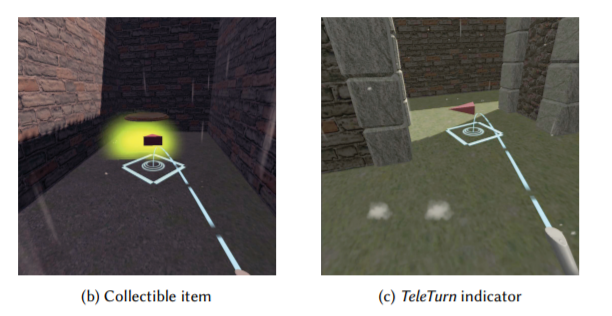 Locomotion is one of the most essential interaction tasks in virtual reality (VR) with teleportation being widely accepted as the state-of-the-art locomotion technique at the time of this writing. A major draw-back of teleportation is the accompanying physical rotation that is necessary to adjust the users’ orientation either before or after teleportation. This is a limiting factor for tethered head-mounted displays (HMDs) and static body postures and can induce additional simulator sickness for HMDs with three degrees-of-freedom (DOF) due to missing parallax cues. To avoid physical rotation, previous work proposed discrete rotation at fixed intervals (InPlace) as a controller-based technique with low simulator sickness, yet the impact of varying intervals on spatial disorientation, user presence and performance remains to be explored. An unevaluated technique found in commercial VR games is reorientation during the teleportation process (TeleTurn), which prevents physical rotation but potentially increases interaction time due to its continuous orientation selection. In an exploratory user study, where participants were free to apply both techniques, we evaluated the impact of rotation parameters of either technique on user performance and preference. Our results indicate that discrete InPlace rotation introduced no significant spatial disorientation, while user presence scores were increased. Discrete TeleTurn and teleportation without rotation was ranked higher and achieved a higher presence score than continuous TeleTurn, which is the current state-of-the-art found in VR games. Based on observations, that participants avoided TeleTurn rotation when discrete InPlace rotation was available, we distilled guidelines for designing teleportation without physical rotation.