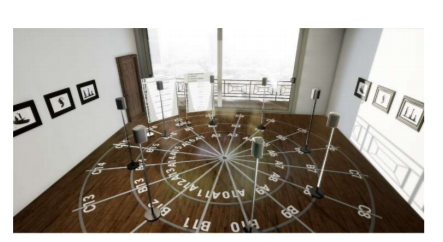 In daily life, social interaction and acoustic communication often take place in complex acoustic environments (CAE) with a variety of interfering sounds and reverberation. For hearing research and evaluation of hearing systems simulated CAEs using virtual reality techniques have gained interest in the context of ecologically validity. In the current study, the effect of scene complexity and visual representation of the scene on psychoacoustic measures like sound source location, distance perception, loudness, speech intelligibility, and listening effort in a virtual audio-visual environment was investigated. A 3-dimensional, 86-channel loudspeaker array was used to render the sound field in combination with or without a head-mounted display (HMD) to create an immersive stereoscopic visual representation of the scene. The scene consisted of a ring of eight (virtual) loudspeakers which played a target speech stimulus and non-sense speech interferers in several spatial conditions. Either an anechoic (snowy outdoor scenery) or echoic environment (loft apartment) with a reverberation time (T60) of about 1.5 s was simulated. In addition to varying the number of interferers, scene complexity was varied by assessing the psychoacoustic measures in isolated consecutive measurements or simultaneously. Results showed no significant effect of wearing the HMD on the data. Loudness and distance perception showed significantly different results when they were measured simultaneously instead of consecutively in isolation. The advantage of the suggested setup is that it can be directly transferred to a corresponding real room, enabling a 1:1 comparison and verification of the perception experiments in the real and virtual environment.