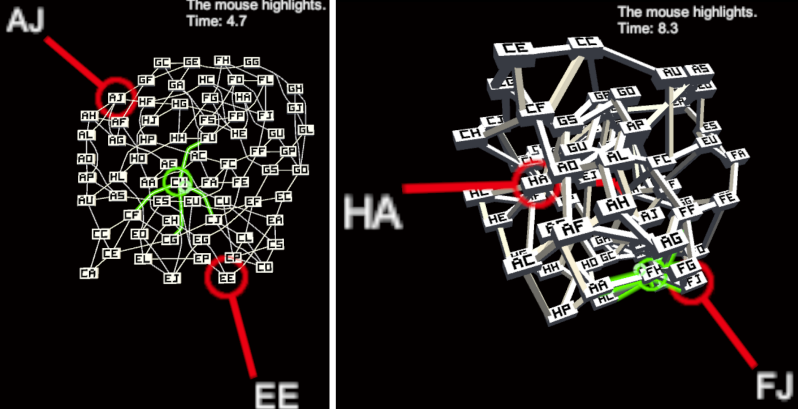 It is common to advise against using 3D to visualize abstract data such as networks, however Ware and Mitchell’s 2008 study showed that path tracing in a network is less error prone in 3D than in 2D. It is unclear, however, if 3D retains its advantage when the 2D presentation of a network is improved using edge-routing, and when simple interaction techniques for exploring the network are available. We address this with two studies of path tracing under new conditions. The first study was preregistered, involved 34 users, and compared 2D and 3D layouts that the user could rotate and move in virtual reality with a handheld controller. Error rates were lower in 3D than in 2D, despite the use of edge-routing in 2D and the use of mouse-driven interactive highlighting of edges. The second study involved 12 users and investigated data physicalization, comparing 3D layouts in virtual reality versus physical 3D printouts of networks augmented with a Microsoft HoloLens headset. No difference was found in error rate, but users performed a variety of actions with their fingers in the physical condition which can inform new interaction techniques.