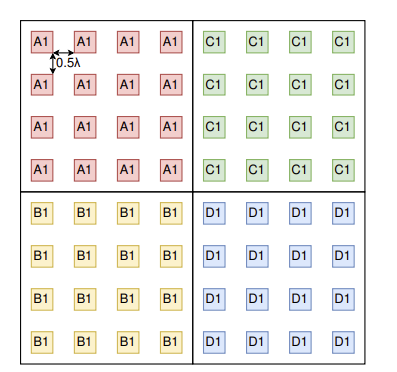 Contemporary Virtual Reality (VR) setups often include an external source delivering content to a Head-Mounted Display (HMD). “Cutting the wire” in such setups and going truly wireless will require a wireless network capable of delivering enormous amounts of video data at an extremely low latency. The massive bandwidth of higher frequencies, such as the millimeter-wave (mmWave) band, can meet these requirements. Due to high attenuation and path loss in the mmWave frequencies, beamforming is essential. In wireless VR, where the antenna is integrated into the HMD, any head rotation also changes the antenna’s orientation. As such, beamforming must adapt, in real-time, to the user’s head rotations. An HMD’s built-in sensors providing accurate orientation estimates may facilitate such rapid beamforming. In this work, we present coVRage, a receive-side beamforming solution tailored for VR HMDs. Using built-in orientation prediction present on modern HMDs, the algorithm estimates how the Angle of Arrival (AoA) at the HMD will change in the near future, and covers this AoA trajectory with a dynamically shaped oblong beam, synthesized using sub-arrays. We show that this solution can cover these trajectories with consistently high gain, even in light of temporally or spatially inaccurate orientational data.