Teams: University of Illinois at Chicago 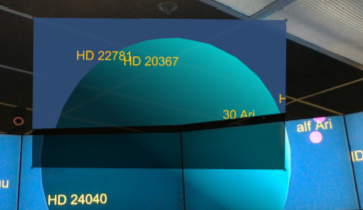 Two major form factors for virtual reality are head-mounted displays and large display environments such as CAVE®and the LCD-based successor CAVE2®. Each of these has distinct advantages and limitations based on how they’re used. This work explores preserving the high resolution and sense of presence of CAVE2 environments in full stereoscopic mode by using a see-though augmented reality HMD to expand the user’s field of regard beyond the physical display walls. In our explorative study, we found that in a visual search task in a stereoscopic CAVE2, the addition of the HoloLens to expand the field of regard did not hinder the performance or accuracy of the participant, but promoted more physical navigation which in post-study interviews participants felt aided in their spatial awareness of the virtual environment.