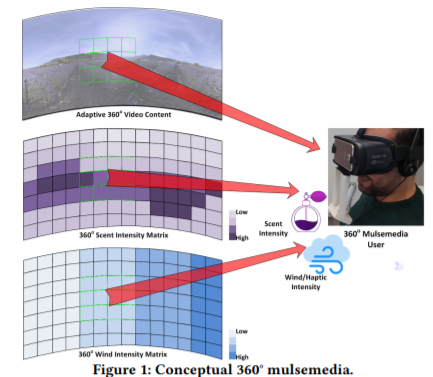 Previous research has shown that adding multisensory media-mulsemedia-to traditional audiovisual content has a positive effect on user Quality of Experience (QoE). However, the QoE impact of employing mulsemedia in 360° videos has remained unexplored. Accordingly, in this paper, a QoE study for watching a 360° video-with and without multisensory effects-in a full free-viewpoint VR setting is presented. The parametric space we considered to influence the QoE consists of the encoding quality and the motion level of the transmitted media. To achieve our research aim, we propose a wearable VR system that provides multisensory enhancement of 360° videos. Then, we utilise its capabilities to systematically evaluate the effects of multisensory stimulation on perceived quality degradation for videos with different motion levels and encoding qualities. Our results make a strong case for the inclusion of multisensory effects in 360° videos, as they reveal that both user-perceived quality, as well as enjoyment, are significantly higher when mulsemedia (as opposed to traditional multimedia) is employed in this context. Moreover, these observations hold true independent of the underlying 360° video encoding quality-thus QoE can be significantly enhanced with a minimal impact on networking resources.