Pupil diameter as a measure of emotion and sickness in VR

PDF: Pupil diameter as a measure of emotion and sickness in VR 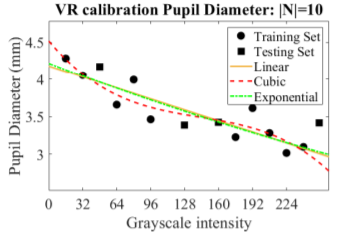 Eye tracking is rapidly becoming popular in consumer technology, including virtual and augmented reality. Eye trackers commonly provide an estimate of gaze location, and pupil diameter. Pupil diameter is useful for interactive systems, as it provides means to estimate cognitive load, stress, and emotional state. However, there are several roadblocks that limit the use of pupil diameter. In VR HMDs there are a lack of models that account for stereoscopic viewing and the increased brightness of near eye displays. Existing work has shown correlations between pupil diameter and emotion, but have not been extended to VR environments. The scope of this work is to bridge the gap between existing research on emotion and pupil diameter to VR, while also attempting to use pupillary data to tackle the problem of simulator sickness in VR.