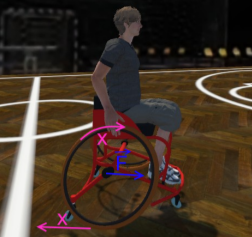 In the last few years, the interest in virtual reality has been increasing partially due to the emergence of cheaper and more accessible hardware, and the increase in content available. One of the possible applications for virtual reality is to lead people into seeing situations from a different perspective, which can help change beliefs. The work reported in this paper uses virtual reality to help people better understand paralympic sports by allowing them to experience the sports’ world from the athletes’ perspective. For the creation of the virtual environment, both computer-generated elements and 360 video are used. This work focused on wheelchair basketball, and a simulator of this sport was created resorting to the use of a game engine (Unity 3D). For the development of this simulator, computer-generated elements were built, and the interaction with them implemented. User studies were conducted to evaluate the sense of presence, motion sickness and usability of the system developed. The results were positive although there are still some aspects that should be improved.