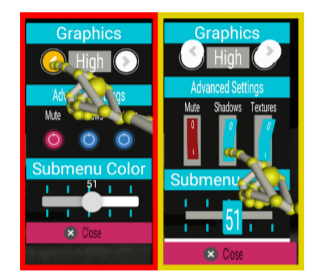 Virtual Reality (VR) is more accessible than ever these days. While topics like performance, motion sickness and presence are well investigated, basic topics as VR User Interfaces (UIs) for menu control are lagging far behind. A major issue is the absence of haptic feedback and naturalness, especially when considering mid-air finger-based interaction in VR, when “grabbable” controllers are not available. In this work, we present and compare the following two visual approaches to mid-air finger-based menu control in VR environments: a planar UI similar to common 2D desktop UIs, and a pseudo-haptic UI based on physical metaphors. The results show that the pseudo-haptic UI performs better in terms of all tested aspects including workload, user experience, motion sickness and immersion.