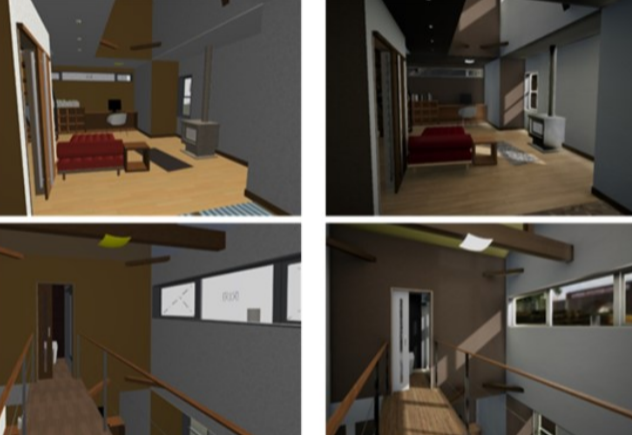 Building information modeling (BIM) is the concept that involves building a three-dimensional model (3D model) as a virtual building and using this virtual building to perform various simulations and evaluations. 3D visualization using virtual reality is a typical use of BIM. A game engine—that is, a development environment for video games—has been effectively utilized as a development environment for architectural virtual reality (VR) applications. Various functions provided by the game engine can be used to develop VR applications. However, the intermediate file-based data coordination that is conventionally used requires problematic tasks associated with the cyclic process involving design and visualization.

A two-way cooperation that interconnects architectural 3D CAD and a VR application developed in a game engine is described in this paper, with a special emphasis on 3D model management. In the two-way cooperation system, 3D models in architectural 3D CAD are shared with the VR application through a relay database. Three-dimensional model representation that is mesh-based and parametric-based is employed to manage 3D models. In addition, two expansions, a delta update function and an editing function, make cooperation smooth and bidirectional. An immersive VR application designed for decision making with stakeholders such as architects or clients is demonstrated in this study.