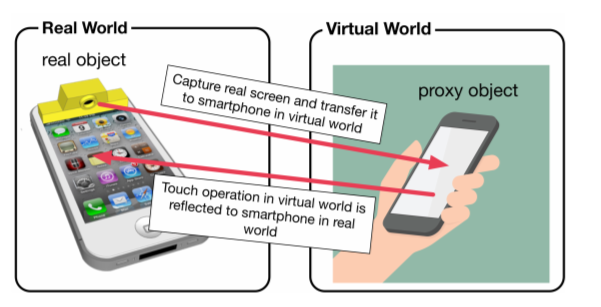 Modern industrial products should incorporate inclusive designs, be sustainable, and capable of addressing emerging usage. The adaptation interface is a supplementary approach to meet these targets. To make capacitive touchscreens adaptive, a method to simulate finger touch is needed. Takashina and others have proposed quasi-touch to allow a touch panel to recognize touches electrically without using fingers. Virtual reality is expected to be found in practical applications now after success in entertainment applications. In such practical applications, a mechanism to connect real objects and virtual objects is needed. We call this mechanism a real-virtual bridge, which is a form of an adaptation interface. As a simple example, a user might want to operate their smartphone when they does a job in the virtual world. Therefore, we applied quasi-touch to allow users to operate real smartphones from virtual worlds, and constructed a proof-of-concept prototype. In a preliminary evaluation, a participant played a real smartphone game in the virtual space and reported that he felt as if he had played a game on a real smartphone.