Teams: University of Texas at Dallas 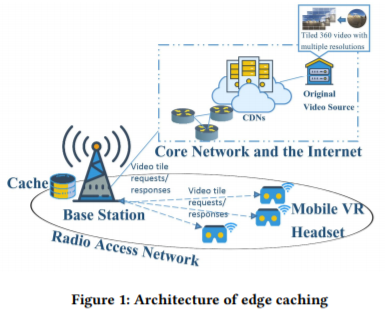 In recent years, there has been growing popularity of Virtual Reality (VR), enabled by technologies like 360° video streaming. Streaming 360° video is extremely challenging due to high bandwidth and low latency requirements. Some VR solutions employ adaptive 360° video streaming which tries to reduce bandwidth consumption by only streaming high resolution video for user’s Field of View (FoV). FoV is the part of the video which is being viewed by the user at any given time. Although FoV-adaptive 360° video streaming has been helpful in reducing bandwidth requirements, streaming 360° video from distant content servers is still challenging due to network latency. Caching popular content close to the end users not only decreases network latency, but also alleviates network bandwidth demands by reducing the number of future requests that have to be sent all the way to remote content servers. In this paper, we propose a novel caching policy based on users’ FoV, called FoV-aware caching policy. In FoV-aware caching policy, we learn a probabilistic model of common-FoV for each 360° video based on previous users’ viewing histories to improve caching performance. Through experiments with real users’ head movement dataset, we show that our proposed approach improves cache hit ratio compared to Least Frequently Used (LFU) and Least Recently Used (LRU) caching policies by at least 40% and 17%, respectively.