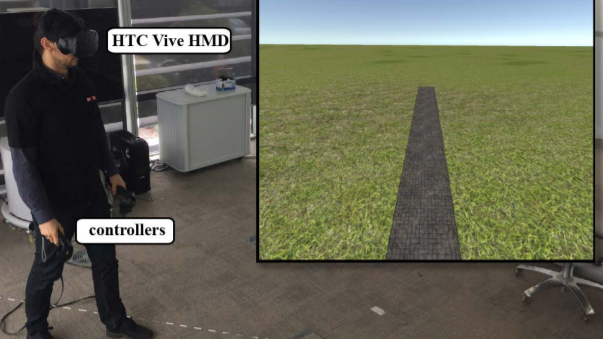 Most current virtual reality (VR) applications use some form of teleportation to cover large distances, or real walking in room-scale setups for moving in virtual environments. Though real walking is the most natural for medium distances, it gets physically demanding and inefficient after prolonged use, while the sudden viewpoint changes experienced with teleportation often lead to disorientation. To close the gap between travel over long and short distances, we introduce TriggerWalking, a biomechanically-inspired locomotion user interface for efficient realistic virtual walking.

The idea is to map the human’s embodied ability for walking to a finger-based locomotion technique. Using the triggers of common VR controllers, the user can generate near-realistic virtual bipedal steps. We analyzed head oscillations of VR users while they walked with a head-mounted display, and used the data to simulate realistic walking motions with respect to the trigger pulls. We evaluated how the simulation of walking biomechanics affects task performance and spatial cognition. We also compared the usability of TriggerWalking with joystick, teleportation, and walking in place. The results show that users can efficiently use TriggerWalking, while still benefiting from the inherent advantages of real walking.