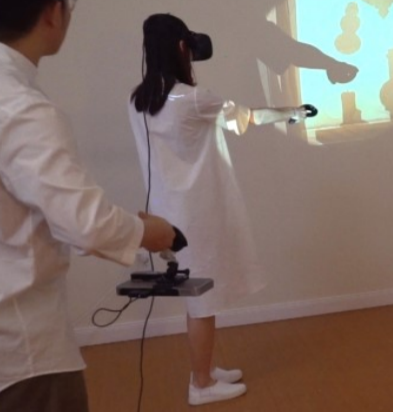 MagicTorch is a context-aware projection mapping system connecting virtual reality (VR) head-mounted display (HMD) users, non-HMD users, together with the tangible physical space. Around this system, we create an asymmetrical multiplatform game CatEscape, where the players have distinct game mechanics and perspectives based on the devices they use: a survival game for VR player, an explorer game for augmented reality (AR) player, and a strategy game for tablet player. We use MagicTorch, a positional tracked portable projection system, to superimpose virtual objects onto physical environment, where the AR player can actively unveil the hidden dimension in the real world. This spatial AR system opens up novel possibilities of presentation methods.