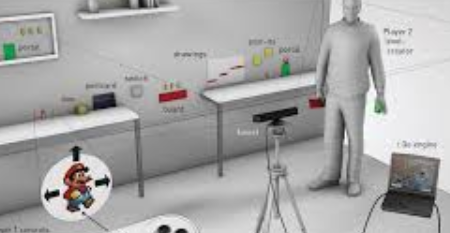 Video games are conventionally screen-bound, restricted to predefined character movements and have a limited amount of interaction possibilities depending on the controller and the level architecture. Although the ways in which we can interact with games have improved over recent years, the digital world we are interacting with is still normally confined to the screen and restricted by predefined scenarios.

In this paper, we introduce the i.Ge engine, a real-time video game level editor that allows users to interact with their own environment to create game content with real everyday objects, making them part of the level design. Thus, our engine reduces the gap between playing and creating by making both possible at the same time in a spatial augmented reality, thereby introducing new concepts in the field of game interaction and game design.