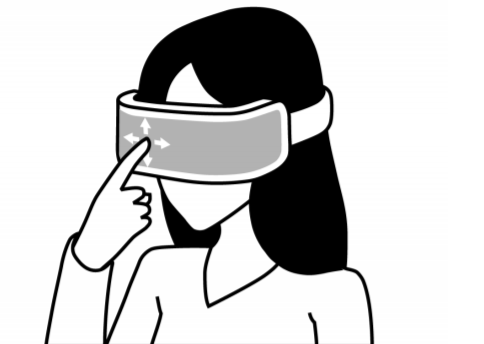 In this paper, we propose a new interface for virtual reality headset: a touchpad in front of the headset. To demonstrate the feasibility of the front touch interface, we built a prototype device, explored VR UI design space expansion, and performed various user studies. We started with preliminary tests to see how intuitively and accurately people can interact with the front touchpad. Then, we further experimented various user interfaces such as a binary selection, a typical menu layout, and a keyboard. Two-Finger and Drag-n-Tap were also explored to find the appropriate selection technique. As a low-cost, light-weight, and in low power budget technology, a touch sensor can make an ideal interface for mobile headset. Also, front touch area can be large enough to allow wide range of interaction types such as multi-finger interactions. With this novel front touch interface, we paved a way to new virtual reality interaction methods.