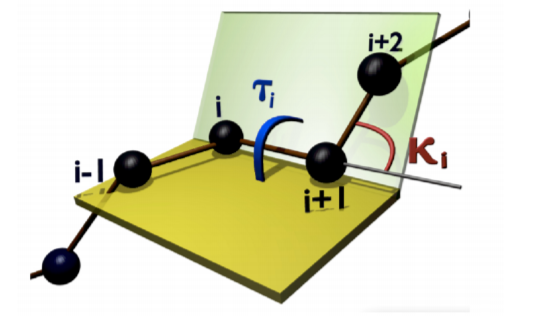 A protein is traditionally visualised as a piecewise linear discrete curve, and its geometry is conventionally characterised by the extrinsically determined Ramachandran angles. However, a protein backbone has also two independent intrinsic geometric structures, due to the peptide planes and the side chains. Here we adapt and develop modern 3D virtual reality techniques to scrutinize the atomic geometry along a protein backbone, in the vicinity of a peptide plane. For this we compare backbone geometry-based (extrinsic) and structure-based (intrinsic) coordinate systems, and as an example we inspect the trans and cis peptide planes. We reveal systematics in the way how a cis peptide plane deforms the neighbouring atomic geometry, and we develop a virtual reality based visual methodology that can identify the presence of a cis peptide plane from the arrangement of atoms in its vicinity. Our approach can easily detect exceptionally placed atoms in crystallographic structures. Thus it can be employed as a powerful visual refinement tool which is applicable also in the case when resolution of the protein structure is limited and whenever refinement is needed. As concrete examples we identify a number of crystallographic protein structures in Protein Data Bank (PDB) that display exceptional atomic positions around their cis peptide planes.