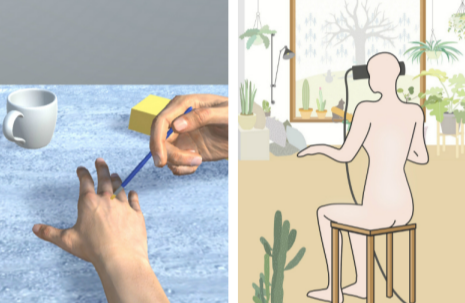 Virtual Reality (VR) becomes accessible to mimic a “real-like” world now. People who have a VR experience usually can be impressed by the immersive feeling, they might consider themselves are actually existed in the VR space. Self-consciousness is important for people to identify their own characters in VR space, and illusory ownership can help people to “build” their “bodies”. The rubber hand illusion can convince us a fake hand made by rubber is a part of our bodies under certain circumstances. Researches about autoscopic phenomena extend this illusory to the so-called full body illusion. We conducted 3 type of experiments to study the illusory ownership in VR space as it shows in Figure 1, and we learned: Human body must receive the synchronized visual signal and somatosensory stimulus at the same time; The visual signal must be the first person perceptive; the subject and the virtual body needs to be the same height as much as possible. All these illusory ownerships accompanied by the body temperature decreases, where the body is stimulated.