Augmenting the thermal flux experiment: a mixed reality approach with the HoloLens

PDF: Augmenting the thermal flux experiment: a mixed reality approach with the HoloLens 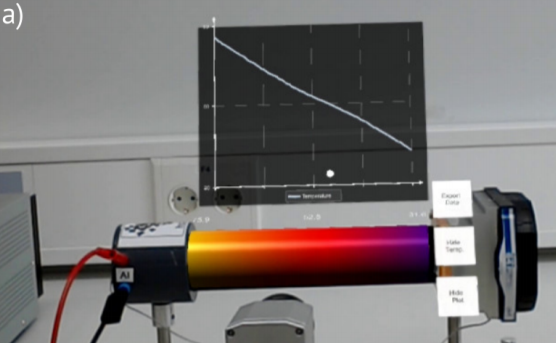 In the field of Virtual Reality (VR) and Augmented Reality (AR) technologies have made huge progress during the last years and also reached the field of education. The virtuality continuum, ranging from pure virtuality on one side to the real world on the other has been successfully covered by the use of immersive technologies like head-mounted displays, which allow to embed virtual objects into the real surroundings, leading to a Mixed Reality (MR) experience. In such an environment digital and real objects do not only co-exist, but moreover are also able to interact with each other in real-time. These concepts can be used to merge human perception of reality with digitally visualized sensor data and thereby making the invisible visible. As a first example, in this paper we introduce alongside the basic idea of this column an MR-experiment in thermodynamics for a laboratory course for freshman students in physics or other science and engineering subjects which uses physical data from mobile devices for analyzing and displaying physical phenomena to students.