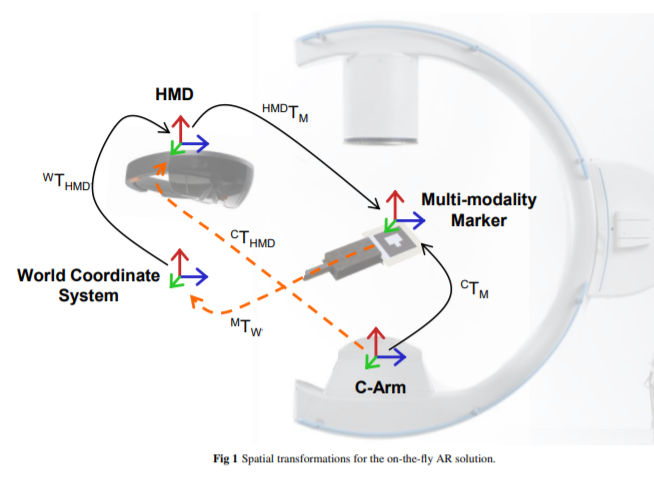 Fluoroscopic X-ray guidance is a cornerstone for percutaneous orthopaedic surgical procedures. However, two-dimensional observations of the three-dimensional anatomy suffer from the effects of projective simplification. Consequently, many X-ray images from various orientations need to be acquired for the surgeon to accurately assess the spatial relations between the patient’s anatomy and the surgical tools. In this paper, we present an on-the-fly surgical support system that provides guidance using augmented reality and can be used in quasi-unprepared operating rooms. The proposed system builds upon a multi-modality marker and simultaneous localization and mapping technique to co-calibrate an optical see-through head mounted display to a C-arm fluoroscopy system. Then, annotations on the 2D X-ray images can be rendered as virtual objects in 3D providing surgical guidance. We quantitatively evaluate the components of the proposed system, and finally, design a feasibility study on a semi-anthropomorphic phantom. The accuracy of our system was comparable to the traditional image-guided technique while substantially reducing the number of acquired X-ray images as well as procedure time. Our promising results encourage further research on the interaction between virtual and real objects, that we believe will directly benefit the proposed method. Further, we would like to explore the capabilities of our on-the-fly augmented reality support system in a larger study directed towards common orthopaedic interventions.