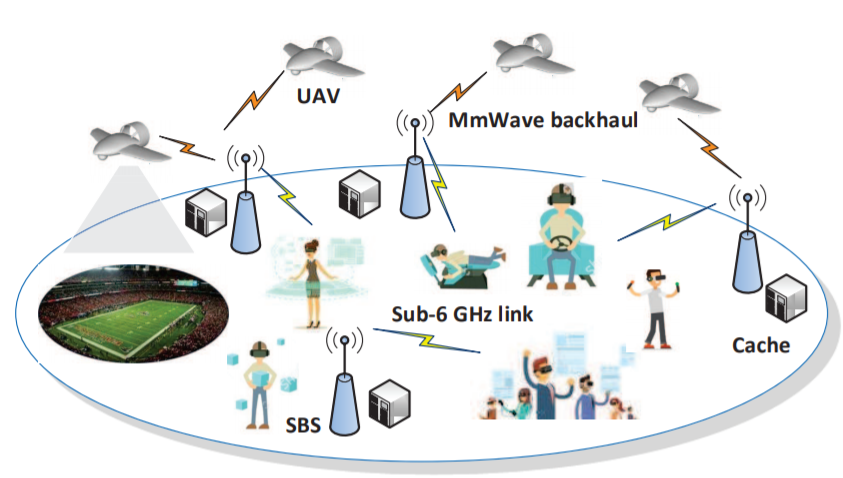 In this paper, the problem of content caching and transmission is studied for a wireless virtual reality (VR) network in which unmanned aerial vehicles (UAVs) capture videos on live games or sceneries and transmit them to small base stations (SBSs) that service the VR users. However, due to its limited capacity, the wireless network may not be able to meet the delay requirements of such 360 content transmissions. To meet the VR delay requirements, the UAVs can extract specific visible content (e.g., user field of view) from the original 360 data and send this visible content to the users so as to reduce the traffic load over backhaul and radio access links. To further alleviate the UAV-SBS backhaul traffic, the SBSs can also cache the popular contents that users request. This joint content caching and transmission problem is formulated as an optimization problem whose goal is to maximize the users’ reliability, defined as the probability that the content transmission delay of each user satisfies the instantaneous VR delay target. To address this problem, a distributed deep learning algorithm that brings together new neural network ideas from liquid state machine (LSM) and echo state networks (ESNs) is proposed. The proposed algorithm enables each SBS to predict the users’ reliability so as to find the optimal contents to cache and content transmission format for each UAV. Analytical results are derived to expose the various network factors that impact content caching and content transmission format selection. Simulation results show that the proposed algorithm yields 25.4% gain of reliability compared to Q-learning. The results also show that the proposed algorithm can achieve 14.7% gain of reliability due to the reduction of traffic load over backhaul compared to the proposed algorithm with random caching.