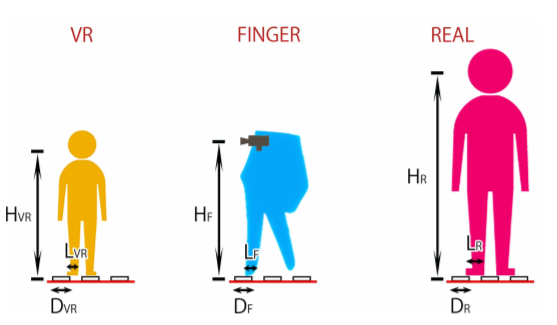 The objective of the system presented in this paper is to give users tactile feedback while walking in a virtual world through an anthropomorphic finger motion interface. We determined that the synchrony between the first person perspective and proprioceptive information together with the motor activity of the user’s fingers are able to induce an illusionary feeling that is equivalent to the sense of ownership of the invisible avatar’s legs. Under this condition, the perception of the ground under the virtual avatar’s foot is felt through the user’s fingertip. The experiments indicated that using our method the scale of the tactile perception of the texture roughness was extended and that the enlargement ratio was proportional to the avatar’s body (foot) size. In order to display the target tactile perception to the users, we have to control only the virtual avatar’s body (foot) size and the roughness of the tactile texture. Our results suggest that in terms of tactile perception fingers can be a replacement for legs in locomotion interfaces.