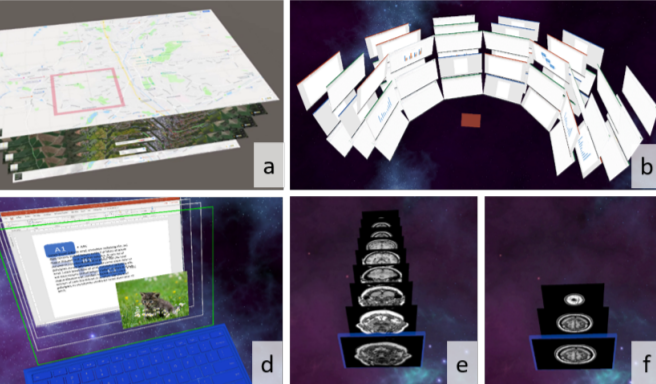 Virtual Reality (VR) has the potential to transform knowledge work. One advantage of VR knowledge work is that it allows extending 2D displays into the third dimension, enabling new operations, such as selecting overlapping objects or displaying additional layers of information. On the other hand, mobile knowledge workers often work on established mobile devices, such as tablets, limiting interaction with those devices to a small input space. This challenge of a constrained input space is intensified in situations when VR knowledge work is situated in cramped environments, such as airplanes and touchdown spaces.
In this paper, we investigate the feasibility of interacting jointly between an immersive VR head-mounted display and a tablet within the context of knowledge work. Specifically, we 1) design, implement and study how to interact with information that reaches beyond a single physical touchscreen in VR; 2) design and evaluate a set of interaction concepts; and 3) build example applications and gather user feedback on those applications.