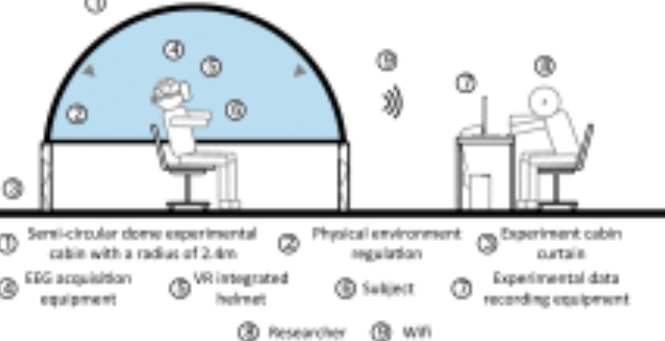 In order to accurately and quantitatively describe the influence of a building’s spatial environment on subjective human perception, this research establishes a relationship framework between the spatial environment and subjective feelings, with the goal of improving occupant satisfaction and work efficiency. In pursuit of this goal, this study presents actual scenes through virtual space and introduces a new research concept for analyzing human brain data. The researchers adopted virtual reality technology in a controlled laboratory environment to compose building simulation spaces and created immersive space perceptions in response to different scenarios. Neural signal electroencephalogram (EEG) data were obtained in the simulation space from participants wearing EEG signal acquisition caps. The experiment process was divided into two phases: scene cognition and task performance. Changes in human perception, as measured on physiological, psychological, and work efficiency indexes, were examined in three environments: open natural, semi-open library, and closed basement spaces. Based on a 32-point analysis of the EEGs of 30 subjects, researchers determined four points and one region with the most significant EEG changes after scene switching. Also, by examining the EEG rhythms in the scene cognition experiment phase, the authors identified a coupling relationship between β rhythms and total time to task completion, proving the mechanistic relationship between β rhythms and work efficiency. Finally, this research revealed a correlation between subjective perception and physiological signals by analyzing the relevance of the connection between subjective questionnaire responses and the β rhythms demonstrated in the EEG experiment, and then deducing the mechanism affecting work efficiency as influenced by different environments. The results obtained show that in the context of changes to elements of a building’s spatial environment, human work efficiency is most related to the β rhythms at several test points and the right temporal lobe region of the brain. Moreover, β rhythms are closely related to satisfaction with human spatial perception. Therefore, this research provides a more accurate set of reference information for building space design based on occupant satisfaction and physical and mental health. The methods and conclusions demonstrated here can be adopted as feedback for ways of obtaining more realistic information from human brain signals and using those data to optimize architectural space design.