A Real-Time Markerless Augmented Reality Framework Based on SLAM Technique 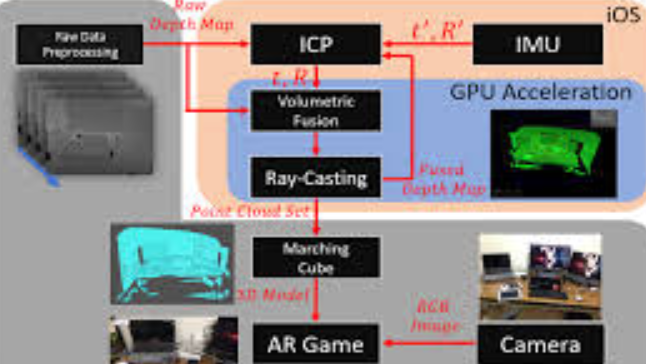 The most common way to perform Augmented Reality (AR) is to use markers to calibrate the camera pose, which enables later placement/projection of virtual content into the captured real scene accordingly. However, marker-based AR has an inherent drawback, i.e. the requirement of specific marker(s), which may limit the development of its applications. In contrast, markerless AR uses visual or depth information of the captured scene to estimate the camera pose, thus no special marker is needed for calibaration, nonetheless, requires higher computation complexity. In this work, we design a markerless AR framework that simultanesously considers mobility, accuracy, and computation complexity. The proposed AR framework can achieve real-time 3D environment reconstruction by using a mobile device equipped with a depth camera and Inertial Measurement Units (IMUs). We further design an AR game based on the Unity3D engine to validate the feasibility and accuracy of the proposed markerless AR framework, which successfully improves the game experience.