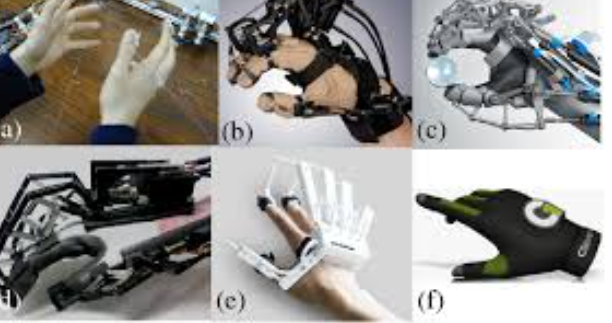 In this paper, a wearable hand system for virtual reality is proposed. The proposed system can deliver accurate force to three fingertips (thumb, index, and middle fingers), which play dominant roles in manipulating and interacting with the external environment, and also measure fingertip positions of the three fingers. The proposed system has five degrees of freedom (DOFs) for each finger structure to permit natural finger motion, can be easily worn by clicking the silicon-coated fingertip structures and buckling the wearable structure around the palm. The forces delivered to the fingertips are controlled by the motor current with the robust control algorithm, and the fingertip position is calculated by forward kinematics. The performance of the proposed system was verified experimentally; the calculated fingertip position was compared to a camera-based motion capture system and interactions with objects of different stiffness were tested.