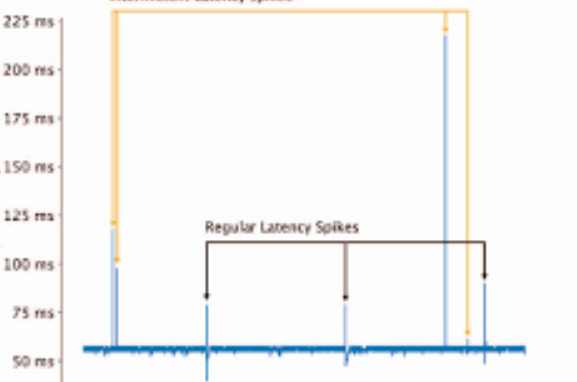 Latency in Virtual Reality (VR) applications can have numerous detrimental effects, e.g., a hampered user experience, a reduced user performance, or the occurrence of cybersickness. In VR environments, latency usually is measured as Motion-to-Photon (MTP) latency and reported as a mean value. This mean is taken during some specific intervals of sample runs with the target system, often detached in significant aspects from the final target scenario, to provide the necessary boundary conditions for the measurements. Additionally, the reported mean value is agnostic to dynamic and spiking latency behavior. This paper introduces an apparatus that is capable of determining per-frame MTP latency to capture dynamic MTP latency and latency jitter in addition to the commonly reported mean values of latency. The approach is evaluated by measuring MTP latency of a VR simulation based on the Unreal engine and the HTC Vive as a typical consumer-grade Head-Mounted Display (HMD). In contrast to previous approaches, the system does not rely on the HMD to be fixed to an external apparatus, can be used to assess any simulation setup, and can be extended to continuously measure latency during run-time. We evaluate the accuracy of our apparatus by injecting a controlled artificial latency in a VR simulation. We show that latency jitter artifacts already occur without system load, potentially caused by the tracking of the specific HMD, and how mean latency and jitter increase under system load, leading to dropped frames and an overall degraded system performance. The presented system can be used to monitor latency and latency jitter as critical simulation characteristics necessary to report and control to avoid unwanted effects and detrimental system performance.