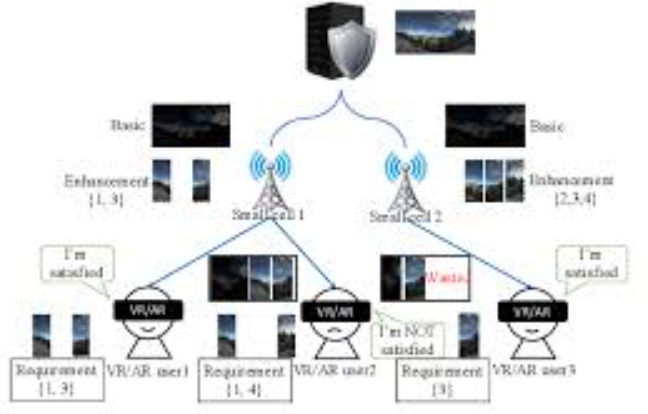 The delivery of 360 videos for virtual and augmented reality presents many technical challenges especially in bandwidth starved wireless environments. Recently, a so-called two-tier approach has been proposed which delivers a basic-tier chunk and select enhancement-tier chunks to improve user experience while reducing network resources consumption. The video chunks are to be transmitted via unicast or multicast over an ultra-dense small cell infrastructure with enough bandwidth where small cells store video chunks in local caches. In this setup, user-cell association algorithms play a central role to efficiently deliver video since users may only download video chunks from the cell they are associated with. Motivated by this, we jointly formulate the problem of user-cell association and video chunk multicasting/unicasting as a mixed integer linear programming and prove its NP-hardness. We then propose two polynomial-time, approximation algorithms and show via extensive simulations that they are near-optimal in practice and improve user experience by 30% compared to baseline user-cell association schemes.