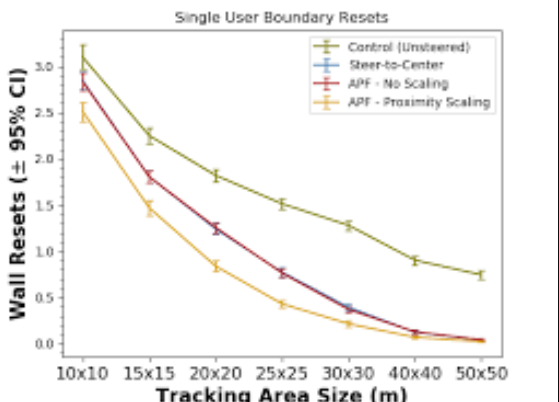 Immersive Virtual Environment systems that utilize Head Mounted Displays and a large tracking area have the advantage of being able to use natural walking as a locomotion interface. In such systems, difficulties arise when the virtual world is larger than the tracking area and users approach area boundaries. Redirected walking (RDW) is a technique that distorts the correspondence between physical and virtual world motion to steer users away from boundaries and obstacles, including other co-immersed users. Recently, a RDW algorithm was proposed based on the use of artificial potential fields (APF), in which walls and obstacles repel the user. APF-RDW effectively supports multiple simultaneous users and, unlike other RDW algorithms, can easily account for tracking area dimensions and room shape when generating steering instructions. This work investigates the performance of a refined APF-RDW algorithm in different sized tracking areas and in irregularly shaped rooms, as compared to a Steer-to-Center (STC) algorithm and an un-steered control condition. Data was generated in simulation using logged paths of prior live users, and is presented for both single-user and multi-user scenarios. Results show the ability of APF-RDW to steer effectively in irregular concave shaped tracking areas such as L-shaped rooms or crosses, along with scalable multi-user support, and better performance than STC algorithms in almost all conditions.