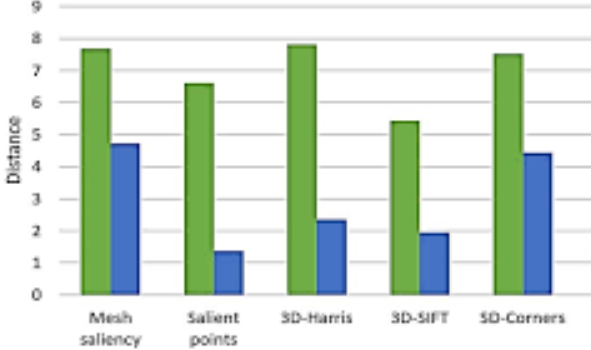 A possible solution to ensure real-time interaction with virtual environments, while not visibly degrading the quality of object models is to construct selectively-densified meshes, that preserve a higher density around the regions that characterize the most the object’s shape and properties. The purpose of such an approach is to aim at improving the perceived quality of the models in those areas subjected to increased observation by users. In this paper, a classical computational visual attention model is employed on images collected from multiple viewpoints over the surface of an object to identify regions that attract visual attention. A novel approach is then proposed to allow the use of this model for the detection of salient points on the surface of 3D objects, including: an iterative technique to extract salient points from the saliency map, a procedure for the selection of viewpoints for saliency computation based on the best viewpoint for an object, and a projection algorithm to find the coordinates of the identified salient points in images on the surface of the 3D object. The areas around the identified salient points are constrained at maximum resolution in a selectively-densified mesh obtained using the QSlim simplification algorithm. The results are compared with existing solutions from the literature to demonstrate the superiority of the proposed approach.