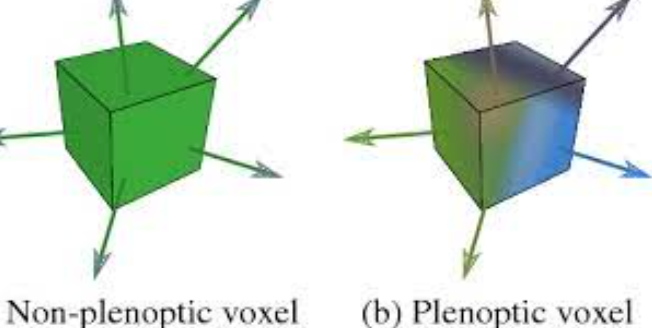 Point clouds have recently gained interest for the represention of 3D scenes in augmented and virtual reality. In real-time applications point clouds typically assume one color per point. While this approach is suited to represent diffuse objects, it is less realistic with specular surfaces. We consider the compression of plenoptic point clouds, wherein each voxel is associated to colors as seen by different angles. We propose an efficiently compressible representation to incorporate the plenoptic information of each voxel. We have proposed three compression methods, one based on a cylindrical projection and two others based on the intersection of the line of view with the voxel’s face, one using flat boundaries and the other using a spherical boundary. Extensive tests have shown that the last two have the best performance, which are much superior than independently encoding the color attributes from each of the cameras point of views.