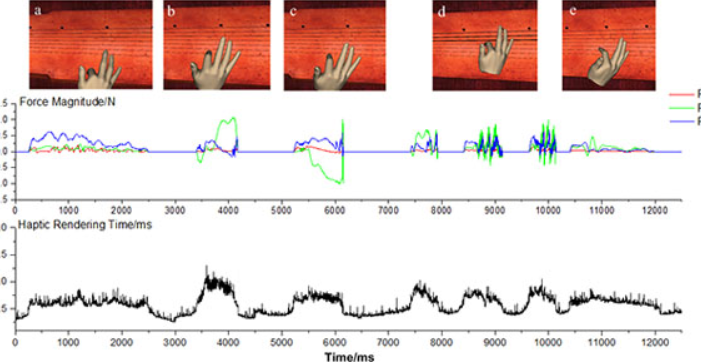 Six degree-of-freedom (DoF) haptic rendering of multi-region contacts between a moving hand avatar and varied-shaped components of a music instrument is fundamental to realizing interactive simulation of music playing. There are two aspects of computational challenges: first, some components have significantly small sizes in some dimensions, such as the strings on a seven-string plucked instrument (e.g., Guqin), which makes it challenging to avoid pop-through during multi-region contact scenarios. Second, deformable strings may produce high-frequency vibration, which requires simulating diversified and subtle force sensations when a hand interacts with strings in different ways. In this paper, we propose a constraint-based approach to haptic interaction and simulation between a moving hand avatar and various parts of a string instrument, using a cylinder model for the string that has a large length-radius ratio and a sphere-tree model for the other parts that have complex shapes. Collision response algorithms based on configuration-based optimization is adapted to solve for the contact configuration of the hand avatar interacting with thin strings without penetration. To simulate the deformation and vibration of a string, a cylindrical volume with variable diameters is defined with response to the interaction force applied by the operator. Experimental results have validated the stability and efficiency of the proposed approach. Subtle force feelings can be simulated to reflect varied interaction patterns, to differentiate collisions between the hand avatar with a static or vibrating string and the effects of various colliding forces and touch locations on the strings.