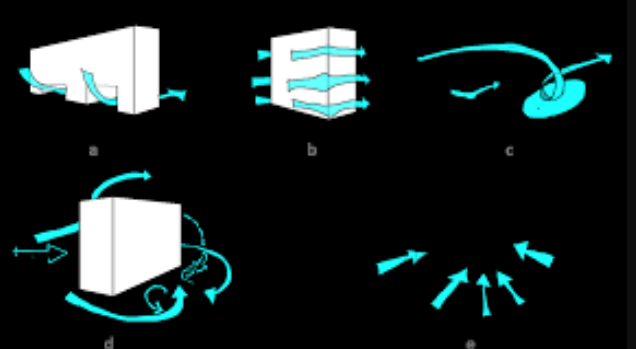 The set of physical and sensitive phenomena that interacts with the urban morphology acts on the resulting perception from the users of a place. Its study and representation provides elements beyond the aesthetics aspects that can allow a better understanding of the space and future urban projects. We aim to analyze the effects of three different wind representations in terms of perception and sense of presence in virtual reality (VR). We focus on the following conditions: (R) reference scene with the audiovisual representation of the mechanical effects of the wind on the elements of the context, (V) reference scene plus the visualization of the wind flow, present (among others) in the architecture field, (T) reference scene plus tactile restitution of wind and eventually (V+T) assembling all previous conditions. For the experiment, we present to the participants (R), then (V) followed by (T), and finish with (V+T). 37 participants evaluated 12 different stop points (divided into four routes in the same simulated street), where they had to determine the perceived wind force and direction concerning the four different conditions (each one corresponding to one route). At the end of each route, participants evaluated their sense of presence in the VR scene. Our analysis showed significant effects of tactile restitution over the visual effects used in the study, both for understanding wind properties and for increasing the sense of presence in the VR scene. In terms of wind direction, (T) reduced the estimation error by 27% compared to (V). Concerning wind force, the reduction was 9.8%. As far as presence was concerned, (T) increased the sense of presence by 12.2% compared to (V). Index Terms: Human-centered computing-Human computer interaction (HCI)-HCI design and evaluation methods-User studies.