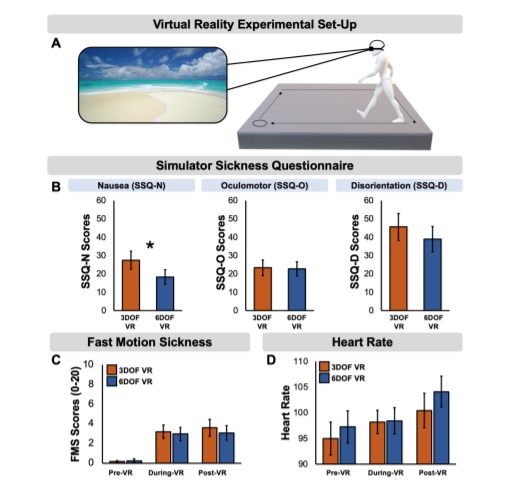 Despite the technological advancements in Virtual Reality (VR), users are constantly combating feelings of nausea and disorientation, the so called cybersickness. Triggered by a sensory conflict between the visual and vestibular systems, cybersickness symptoms cause discomfort and hinder the immersive VR experience. Here we investigated cybersickness in 360-degree VR. In 360-degrees VR experiences, movement in the real world is not reflected in the virtual world, and therefore self-motion information is not corroborated by matching visual and vestibular cues, which may potentially induce cybersickness. We have evaluated whether an Artificial Intelligence (AI) software designed to supplement the VR experience with artificial 6-degree-of-freedom motion may reduce sensory conflict, and therefore cybersickness. Explicit (questionnaires) and implicit (physiological responses) measurements were used to measure cybersickness symptoms during and after VR exposure. Our results confirmed a reduction in feelings of nausea during the AI supplemented 6-degree-of-freedom motion VR. Through improving the congruency between visual and vestibular cues, users can experience more engaging, immersive and safe virtual reality, which is critical for the application of VR in educational, medical, cultural and entertainment settings.