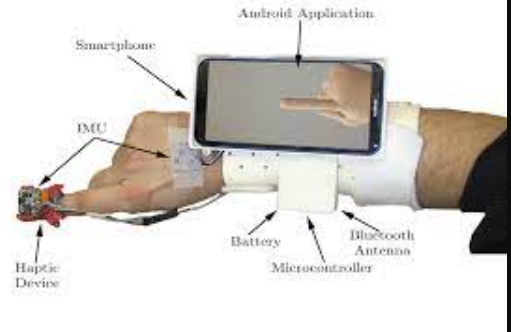 Taking advantages of widely distributed hardware such as smartphones and tablets, Mobile Augmented Reality (MAR) market is rapidly growing. Major improvements can be envisioned in increasing the realism of virtual interaction and providing multimodal experiences. We propose a novel system prototype that locates the display on the forearm using a rigid support to avoid constraints due to hand-holding, and is equipped with hand tracking and cutaneous feedback. The hand tracking enables the manipulation of virtual objects, while the haptic rendering enhances the user’s perception of the virtual entities. The experimental setup has been tested by ten participants, that expressed their impressions about usability and functionality of the wrist-mounted system w.r.t. the traditional hand-held condition. Subjects’ personal evaluations suggest that the AR experience provided by the wrist-based approach is more engaging and immersive.