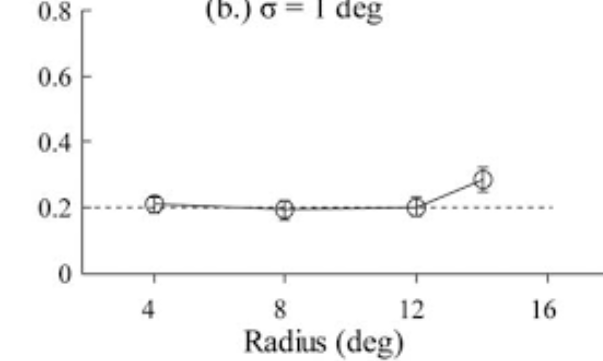 Understanding of human sensory system will provide useful information’s to the development of virtual reality (VR) technology that simulates a 3D virtual world and enables the generation of visual, audio, and haptic feedback for the full immersion of users. The present study is aimed to promote a better understanding of the visual system which is indispensable to recognize objects, face, animal, building, and natural scene in the visual environment in daily lives. We are focused to study difference in perception between foveal and peripheral visual system. We asked here about dependency of contrast discrimination of circular contour patterns on retinal eccentricity of the visual field, using standard (non-magnified) and cortically magnified stimuli. The contrast discrimination thresholds for the standard stimuli increased with increasing the retinal eccentricity. However, those for the cortically magnified stimuli remained constant irrespective of change of retinal eccentricity. We concluded that contrast discrimination thresholds, once scaling by cortically magnification transformation, were similar at all eccentricities.