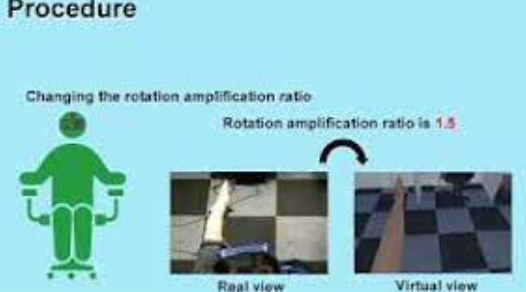 In virtual reality (VR) systems, a user avatar is typically manipulated based on actual body motion in order to present natural immersive sensations resulted from proprioceptors. It is useful to be able to feel a large body motion in a virtual environment while it is actually smaller in the real environment. As a method to achieve this, we have been working on kinesthetic illusions induced by tendon vibration. In this article, we report on a user study focusing on the effects of a combination of visual stimulus and tendon vibration. In the user study, we measured subjects’ perceived elbow angles while they observed the corresponding virtual arm bending to 90 degrees, with different rotation amplification ratios between 1.0 and 1.5, with and without tendon vibration on the wrist joint. The results show that the perceived angle is increased by up to 8 degrees when tendon vibration is applied, roughly in proportion to the rotation amplification ratio. Our study suggests that the vision-induced kinesthetic illusion is further increased by tendon vibration, and that our technique can be applied to VR applications to make users feel larger body motion than that in the real environment.