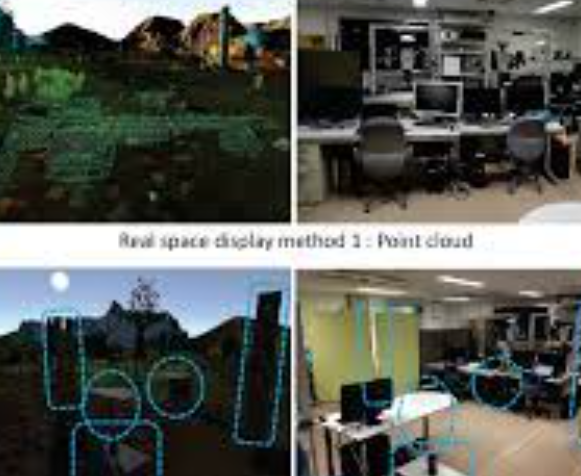 Typical Head-Mounted Displays (HMDs) that provide a highly immersive Virtual Reality (VR) experience make any interaction between a user and real space difficult by occluding the user’s entire field of view. Video see-through type HMDs can solve this problem by superimposing real-space information on the VR environment. The existing method of supporting interactions with the real space is superimposition of boundary lines of the real space on the virtual space in the HMD. However, overlaying the boundary lines on the entire field of view may reduce the user’s immersive feeling. In this paper, we propose two methods to support interactions with the real world while playing immersive VR games without reducing the user’s immersive feeling as much as possible, even when the user wanders. The first method is to superimpose a 3D point cloud of real space around the user on the virtual space in the HMD. The second method is to deploy familiar objects (e.g., furniture in his/her room) in the virtual space in the HMD. The user traces the familiar objects as subgoals to reach the goal. We implement the two methods and conduct a user study to compare interaction performance. As a result of the user study, we find that the second method provides better spatial information about the real space without reducing the user’s immersive feeling, compared to the existing method.