Coherence and Plausibility, not Presence?! Pivotal Conditions for XR Experiences and Effects, a Novel Model

PDF: Coherence and Plausibility, not Presence?! Pivotal Conditions for XR Experiences and Effects, a Novel Model 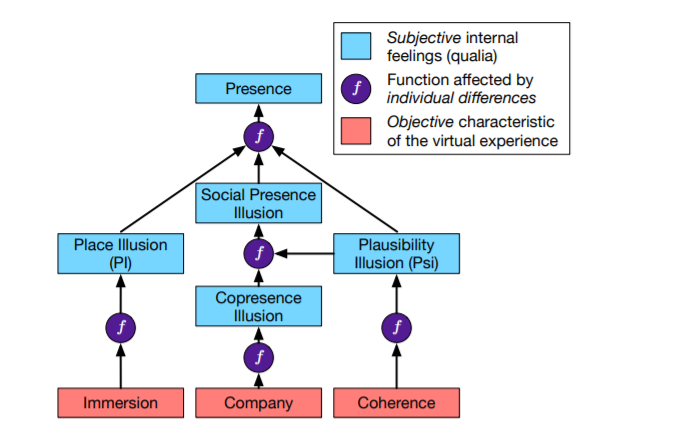 Presence often is considered the most important quale describing the subjective feeling of being in a computer-generated (virtual) or computer-mediated environment. The identification and separation of two orthogonal presence components, i.e., the place illusion and the plausibility illusion, has been an accepted theoretical model describing Virtual Reality (VR) experiences for some time. In this model, immersion is a proposed contributing factor to the place illusion. Lately, copresence and social presence illusions have extended this model, and coherence was proposed as a contributing factor to the plausibility illusion. Such factors strive to identify (objectively) measurable characteristics of an experience, e.g., systems properties that allow controlled manipulations of VR experiences. This perspective article challenges this presence-oriented VR theory. First, we argue that a place illusion cannot be the major construct to describe the much wider scope of Virtual, Augmented, and Mixed Reality (VR, AR, MR: or XR for short). Second, we argue that there is no plausibility illusion but merely plausibility, and we derive the place illusion as a consequence of a plausible generation of spatial cues, and similarly for all of the current model’s so-defined illusions. Finally, we propose coherence and plausibility to become the central essential conditions in a novel theoretical model describing XR experiences and effects.