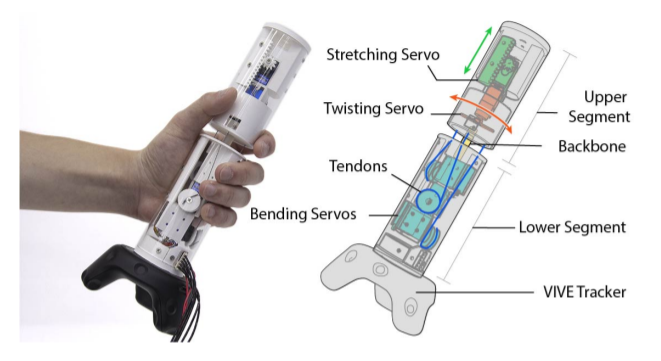 Virtual Reality experiences, such as games and simulations, typically support the usage of bimanual controllers to interact with virtual objects. To recreate the haptic sensation of holding objects of various shapes and behaviors with both hands, previous researchers have used mechanical linkages between the controllers that render adjustable stiffness. However, the linkage cannot quickly adapt to simulate dynamic objects, nor it can be removed to support free movements. This paper introduces GamesBond, a pair of 4-DoF controllers without physical linkage but capable to create the illusion of being connected as a single device, forming a virtual bond. The two controllers work together by dynamically displaying and physically rendering deformations of hand grips, and so allowing users to perceive a single connected object between the hands, such as a jumping rope. With a user study and various applications we show that GamesBond increases the realism, immersion, and enjoyment of bimanual interaction.