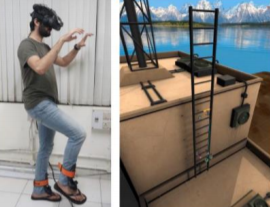 Virtual Reality experiences today are majorly based on horizontal locomotion. In these experiences, movement in the virtual space is accomplished using teleportation, gaze input or tracking in physical space which is limited to a certain extent. Our work focuses on intuitive interactions for vertical locomotion involving both hands and feet. Such an instance of vertical locomotion is – ladder climbing. In this paper, we present an interaction technique for climbing a ladder in Virtual Reality (VR). This technique is derived from the natural motions of the limbs while climbing a ladder in reality, adhering to safe climbing practices. The developed interaction can be used in training experiences as well as gaming experiences. Preliminary evaluation of our interaction technique showed positive results across dimensions like – learnability, natural mapping, and intuitiveness.