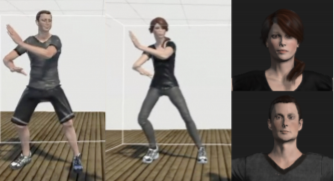 Previous research has shown that when White people embody a black avatar in virtual reality (VR) with full body visuomotor synchrony, this can reduce their implicit racial bias. In this paper, we put men in female and male avatars in VR with full visuomotor synchrony using wearable trackers and investigated implicit gender bias and embodiment. We found that participants embodied in female avatars displayed significantly higher levels of implicit gender bias than those embodied in male avatars. The implicit gender bias actually increased after exposure to female embodiment in contrast to male embodiment. Results also showed that participants felt embodied in their avatars regardless of gender matching, demonstrating that wearable trackers can be used for a realistic sense of avatar embodiment in VR. We discuss the future implications of these findings for both VR scenarios and embodiment technologies.