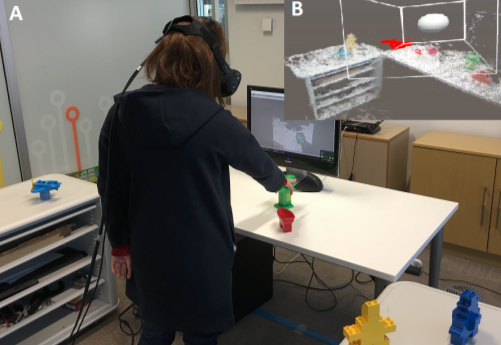 We present a Mixed Reality (MR) system that supports entire scene capturing of the local physical work environment for remote collaboration in a large-scale workspace. By integrating the key-frames captured with external depth sensor as one single 3D point-cloud data set, our system could reconstruct the entire local physical workspace into the VR world. In this case, the remote helper could observe the local scene independently from the local user’s current head and camera position, and provide gesture guiding information even before the local user staring at the target object. We conducted a pilot study to evaluate the usability of the system by comparing it with our previous oriented view system which only sharing the current camera view together with the real-time head orientation data. Our results indicate that this entire scene capturing and sharing system could significantly increase the remote helper’s spatial awareness of the local work environment, especially in a large-scale workspace, and gain an overwhelming user preference (80%) than previous system.