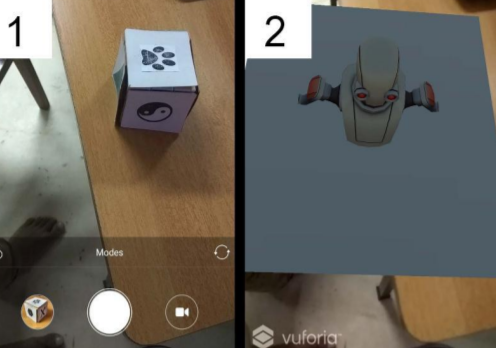 Social robots are gradually populating the human space. The utility of such robots is enormous. They can have socially important functions like training for kids with autism and molding the character and behavior of kids. The human-like features of social robots tend to elicit and maintain and enhance positive emotions in a child. The conclusive aim of social robotics is to develop robots that can seamlessly interact with humans. Making them more anthropomorphic is one of the main tasks in designing them. A humanoid robot requires an enormous amount of compactness of all actuators and sensors for expressing anthropomorphic characters. The cost and laboring required to meet these are huge. Also, some of their facial expressions and body movements do not need any physical interaction with the real world. Here comes the need of virtual robots which have the capability of showing a higher level of anthropomorphism. This paper presents a novel method for designing a low-cost android based social robot by replacing the actuators in humanoid robots and implementing virtual avatars instead. The paper contributes a novel integration methodology which combines a mobile robotic base and a virtual character using augmented reality.