Does gamification work for boys and girls?: An exploratory study with a virtual learning environment

PDF: Does gamification work for boys and girls?: An exploratory study with a virtual learning environment 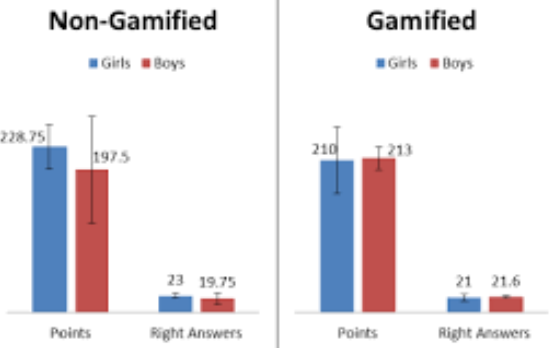 The development and use of Virtual Learning Environments (VLE) has increased considerably over the past decades. Following that trend, many research findings have shown the benefits of using VLE during the learning process. Nevertheless, there are important problems that hinder their use requiring further investigation. Among them, one of the main problems is the inappropriate use of these systems by students. The boredom, lack of interest, monotony, lack of motivation, among other factors, ultimately causes students to behave inappropriately and lead them to a lower performance. In this context, the proposed study investigates whether it is possible to reduce undesirable behaviors and increase performance of students through the use of game mechanics (i.e. gamification). We develop a VLE, E-Game, that can turn on/off several game mechanics, such as points, badges, levels and so on. A case study was conducted with two groups of students to investigate their behavior during their interaction with E-Game with and without gamification. The results indicate that the gamification implemented by E-Game contributed to improve student performance in the case of boys. Yet, improvement was not observed in the case of girls. Furthermore, it was not possible to conclude whether the use of gamification helps to prevent inappropriate student behavior, and therefore, further studies and experiments are needed.