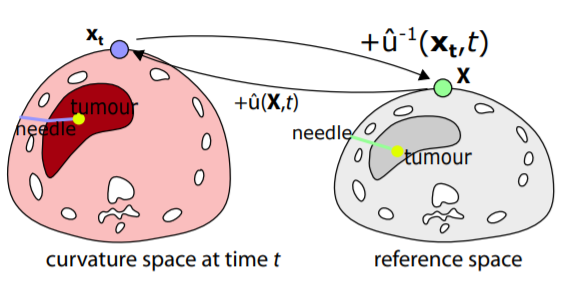 Purpose: Radio-frequency ablations play an important role in the therapy of malignant liver lesions. The navigation of a needle to the lesion poses a challenge for both the trainees and intervening physicians. Methods: This publication presents a new GPU-based, accurate method for the simulation of radio-frequency ablations for lesions at the needle tip in general and for an existing visuo-haptic 4D VR simulator. The method is implemented real-time capable with Nvidia CUDA. Results: It performs better than a literature method concerning the theoretical characteristic of monotonic convergence of the bioheat PDE and a in vitro gold standard with significant improvements (p < 0.05) in terms of Pearson correlations. It shows no failure modes or theoretically inconsistent individual simulation results after the initial phase of 10 seconds. On the Nvidia 1080 Ti GPU it achieves a very high frame rendering performance of >480 Hz. Conclusion: Our method provides a more robust and safer real-time ablation planning and intraoperative guidance technique, especially avoiding the over-estimation of the ablated tissue death zone, which is risky for the patient in terms of tumor recurrence. Future in vitro measurements and optimization shall further improve the conservative estimate.