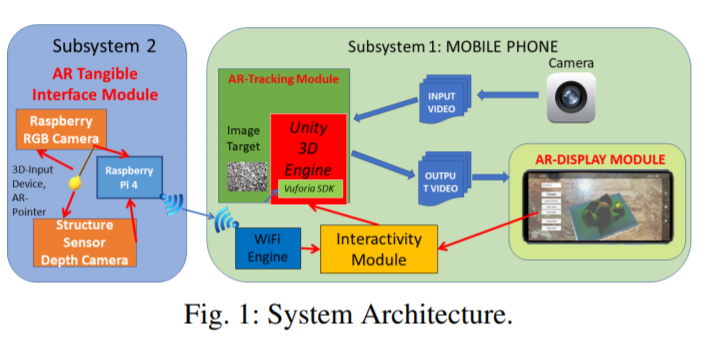 During the last years, the emerging field of Augmented and Virtual Reality (AR-VR) has seen tremendous growth. An interface that has also become very popular for the AR systems is the tangible interface or passive-haptic interface. Specifically, an interface where users can manipulate digital information with input devices that are physical objects. This work presents a low cost Augmented Reality system with a tangible interface that offers interaction between the real and the virtual world. The system estimates in real-time the 3D position of a small colored ball (input device), it maps it to the 3D virtual world and then uses it to control the AR application that runs in a mobile device. Using the 3D position of our “input” device, it allows us to implement more complicated interactivity compared to a 2D input device. Finally, we present a simple, fast and robust algorithm that can estimate the corners of a convex quadrangle. The proposed algorithm is suitable for the fast registration of markers and significantly improves performance compared to the state of the art.