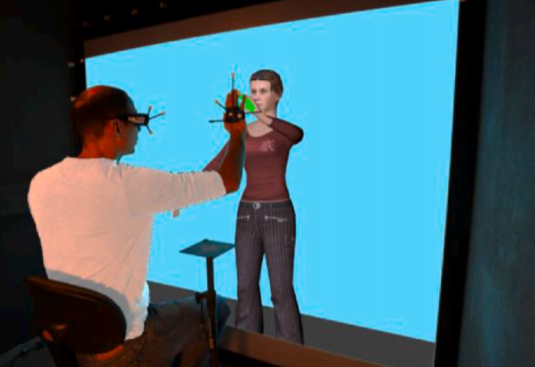 The goal of new adaptive technologies is to allow humans to interact with technical devices, such as robots, in natural ways akin to human interaction. Essential for achieving this goal, is the understanding of the factors that support natural interaction. Here, we examined whether human motor control is linked to the visual appearance of the interaction partner. Motor control theories consider kinematic-related information but not visual appearance as important for the control of motor movements (Flash & Hogan, 1985; Harris & Wolpert, 1998; Viviani & Terzuolo, 1982). We investigated the sensitivity of motor control to visual appearance during the execution of a social interaction, i.e. a high-five. In a novel mixed reality setup participants executed a high-five with a three-dimensional life-size human- or a robot-looking avatar. Our results demonstrate that movement trajectories and adjustments to perturbations depended on the visual appearance of the avatar despite both avatars carrying out identical movements. Moreover, two well-known motor theories (minimum jerk, two-thirds power law) better predict robot than human interaction trajectories. The dependence of motor control on the human likeness of the interaction partner suggests that different motor control principles might be at work in object and human directed interactions.