PDF: A Real-Time Three-Dimensional Tracking and Registration Method in the AR-HUD System 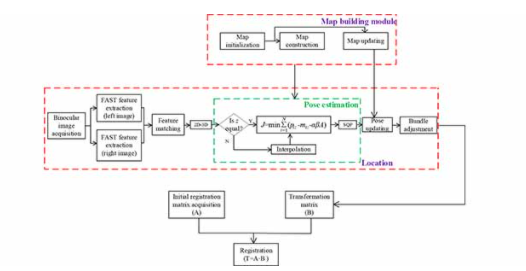 In this paper, we propose a method of 3-D tracking registration with a virtual image and the surroundings in three steps: initial registration matrix acquisition, feature extraction in a road scene, and registration of virtual information in a real environment. We obtain the initial registration matrix according to the relationship between different parts of the system. During transformation matrix solving, we do not match features. Instead, the relationship is based on the characteristic image information. Then, we interpolate another image’s corresponding coordinates and estimate the transform matrix of the map and the image. The average time of the virtual reality registration algorithm can reach 0.0781 s. The average accuracy of our registration method is less than 2 pixels. The proposed algorithm has some advantages. We use features from accelerated segment test feature extraction and the binary robust independent elementary features descriptor to efficiently extract image feature points. The algorithm is more efficient, because it eliminates the feature-matching phase. We apply the proposed virtual reality registration method to a vehicle’s augmented reality head-up display (AR-HUD). We derive the relationship between human eyes, optical system, tracking camera, and real scene in the AR-HUD system. Our experiment proves that the algorithm has a better registration effect on virtual objects, and it enhances road information. Different from the general headup display (HUD) system, our method achieves the true integration of virtual and real world. It improves the distraction problem caused by the mismatch between the existing HUD virtual image and the real scene.