Demo of the Matrix Has You: Realizing Slow Motion in Full-Body Virtual Reality

PDF: Demo of the Matrix Has You: Realizing Slow Motion in Full-Body Virtual Reality 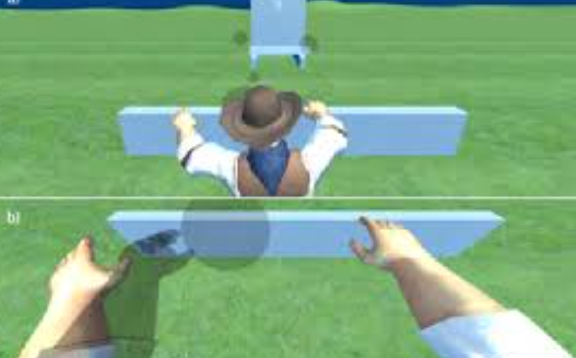 We perceive the flow of time as a constant factor in the real world, but there are examples in media, like films or games, where time is being manipulated and slowed down. Manipulating temporal cues is simple in linear media by slowing down video and audio. Interactive media like VR however poses additional challenges, because user interaction speed is independent from media speed. While the speed of the environment can still be manipulated easily, interaction is a new aspect to consider. We implemented such manipulation by slowing down visual feedback of user movements. In prior experiments we slowed down the virtual representation of a user by applying a velocity based low pass filter and by visually redirecting the motion. We found such a manipulation to be even contributing to realism, enjoyment or presence as long as it is consistent with the experience.